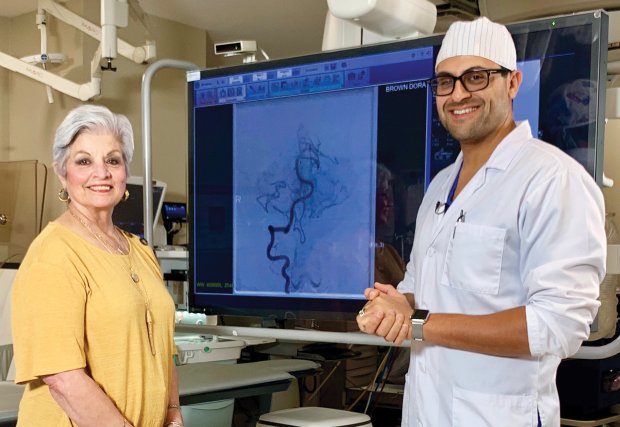 When Dora Brown woke up on the morning of August 17, she realized she could not see clearly and had double vision. She kept opening and closing her eyes, hoping it would clear. Then she realized she had no control over her arms and legs. Her immediate thought was to call her husband, but her phone was downstairs. “It was a miracle I made it down to the first floor. I slid myself down the steps and struggled to get to my phone to call my husband,” says Brown. “I called him and when I spoke it was all gibberish. He called 911 and he and the ambulance arrived at my house at the same time. Then I passed out.”

When Brown arrived at South Texas Health System McAllen, she was taken straight to the catheterization lab, where Endovascular Neurologist Ameer Hassan, DO, began the procedure to remove the clot from Brown’s brain. “Mrs. Brown had an acute ischemic stroke in the basilar artery,” says Dr. Hassan. “In patients with this type of stroke, typically 20-30% will die, and 20-30% will have poor functional outcome. Mrs. Brown is one of the few that have complete functional recovery and are able to do everything they used to do. She is a living testimonial to how successful a mechanical thrombectomy is.”

In addition to surviving her stroke, Brown is also a breast cancer survivor, and says it is by the grace of God that she is still here. “Dr. Hassan is a miracle worker, and the rest of the medical staff are angels,” says Brown. “After the procedure, speech and physical therapists came to evaluate me and said I didn’t need any therapy. I was lucky I had my stroke when I did, because Dr. Hassan was supposed to be elsewhere, but he ended up being here at South Texas Health System McAllen. The way everything came together was truly a miracle.”

Brown was so impressed by the care she received and with her whole patient experience, she is recommending the hospital for McAllen Chamber of Commerce’s customer service award. “I did not realize how many people were involved in my care. They all did this with a smile and I just love them,” she says.

Recognizing the symptoms of a possible stroke:

BALANCE: Does the person have sudden loss of balance or coordination?

EYES: Has the person lost vision in one or both eyes or have they had sudden double vision?

FACE: Ask the person to smile. Does one ide of the face droop?

ARMS: Ask the person to raise both arms. Does one arm drift downward?

SPEECH: Ask the person to repeat a simple phrase. Is it slurred or strange?

TIME: Is critical! If you see any of these signs, call 9-1-1 immediately.