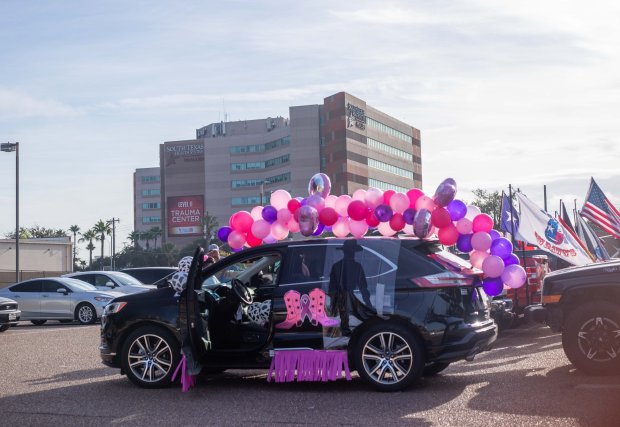 Breast cancer is the most commonly diagnosed cancer in American women, according to the American Cancer Society®. While early detection can improve one’s chances of survival and allows for more treatment options to fight the disease, Hispanic women are 10% less likely than non-Hispanic women to be diagnosed with breast cancer at the early stages of the disease, according to the organization.

With the majority of the Rio Grande Valley’s population being Hispanic, bringing awareness to breast cancer and stressing the importance of early detection is an especially important mission to South Texas Health System.

Get more information about our Think Pink events →

“Women serve in vital roles in our culture and community — from being some of the most successful business owners to often being the primary caretakers of their families, raising children and keeping the household running,” said Javier Villalobos, Mayor of McAllen. “When a woman is diagnosed with breast cancer, it takes a toll on every single person in their lives. Still, they do their best to continue carrying on with their responsibilities and staying strong for those around them. Being here today and seeing the community come together to support this important cause speaks to the heart of McAllen. And I want everybody battling breast cancer to know we are here and will continue to support them in any way we can.”

Attendees "pinked out” their vehicles with balloons, ribbons and streamers, and looped around the main parking lot of South Texas Health System McAllen to show their support for this important cause.

“Breast cancer continues to be one of the deadliest diseases for women in the U.S. While there are several  uncontrollable factors contributing to the disease — like age, family history and gene mutations — there are certain lifestyle practices that women can employ to lower their risk,” said Kennetha Foster, Chief Nursing Officer at South Texas Health System. “This is why it’s so important for us to be an educational resource for the community and have events like today where we can share these lifestyle practices and highlight the importance of annual screenings.”

Parade participants’ vehicles were judged on their creativity, with awards handed out to the top three in three categories: community, first responders, car and motorcycle clubs and STHS staff. Additionally, South Texas Health System selected two Think Pink Ambassadors to help raise awareness for the disease by sharing their own personal battles with breast cancer.

“I was the first person in my family to be diagnosed with breast cancer, so it came as a complete shock,” said Amanda Flores, a 31-year-old mother of one who was diagnosed with stage 3B breast cancer in September 2020 and underwent a mastectomy. “With the toll cancer took on my body and all of the changes, it was tough for me during the beginning to look at myself in the mirror. Now, looking at my reflection, I’m proud of what I see and I hope I can be an inspiration to others who are battling this crazy disease. I say scars are just beauty marks that show our strength.”

While the parade has concluded, South Texas Health System’s breast cancer awareness efforts are not. Throughout the month of October, the system is offering mammograms at special rates — $55 for a 2D screening and $150 for a 3D screening, with the radiologist’s interpretation fee included. While the rates will be honored all month long, those who attend one of the designated Mammo Mondays will also receive a special Think Pink goodie bag.