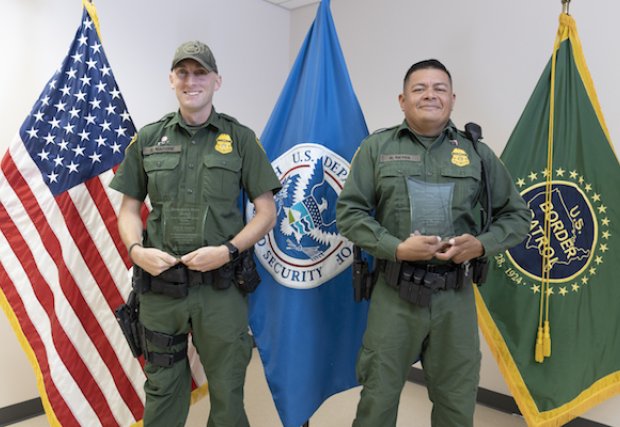 Through a selfless desire to help others, frontline workers and emergency responders risk their lives every day. They rush toward scenes of danger, valuing every life as if it were their own.

That’s the case for U.S. Border Patrol Agents Rene Reyes and Eric Madore. Even though their job responsibilities entail surveilling the Texas/Mexico border and preventing the illegal entry of drugs into the Rio Grande Valley, as well as helping stop illegal border crossings and human trafficking, these heroic agents have gone a step above by earning their EMT certification, which is not a job requirement. 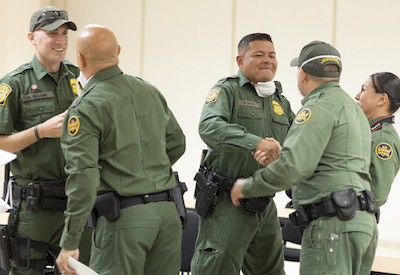 This emergency training came in handy on September 16, when they came across a group of immigrants in the Peñitas area suffering from multiple bee stings. Reyes and Madore quickly rendered aid to the group and helped stabilize them while paramedics and an air ambulance arrived. The patients were later transported to South Texas Health System McAllen where they were treated. All the patients recovered from their injuries.

In recognition of their heroic, lifesaving actions, South Texas Health System held a small ceremony at the U.S. Border Patrol McAllen station on Wednesday, October 20, 2021, to honor Madore and Reyes as this month’s Hometown Heroes honorees.

“Border Patrol Agents are trained to face a myriad of situations when performing their national security duties,” said Brian S. Hastings, Rio Grande Valley Sector Chief Patrol Agent. “Within a matter of seconds, agents may need to switch roles from that of law enforcement to first responder. For Border Patrol Agents Rene Reyes and Eric Madore, their training as Emergency Medical Technicians was an invaluable skill they put to action, preventing any further injury to the involved individuals.”

The agents’ colleagues joined in the celebration of their bravery and watched as STHS McAllen CEO Todd Mann, U.S. Border Patrol Special Operations Supervisor for the McAllen Station Oscar Saldaña and U.S.B.P. Acting Patrol Agent-in-Charge for the Rio Grande Valley Sector Anthony Crane presented Reyes and Madore with their official Hometown Heroes plaques. In all, Reyes, Madore and their fellow EMT-certified agents have responded to nearly 170 distress calls since October 2020, including 59 cases of dehydration and six baby deliveries in 2021.

“Working in healthcare, we realize it's not just doctors and nurses who are saving lives — there is an entire village of frontline workers,” Mann said. “Our community is lucky to have such outstanding first responders who are far too often overlooked. That’s why it’s so important for us to highlight these individuals through our Hometown Heroes program. We want to remind them they are appreciated, and that their work is absolutely making a positive difference in the world.”