Veteran Has a (Healthy) Change of Heart

At 74, He’s Ready for His Next Adventure – Thanks to Intensive Cardiac Rehab 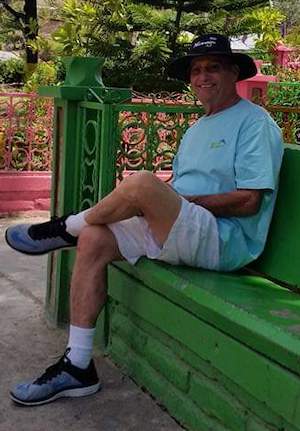 Richard Green can’t stay in one place for too long. The 74-year-old Marine Corps veteran loves travel and adventure. In fact, he once packed up two suitcases and moved to Panama, even though he couldn’t speak the language. “I got along just fine,” he says of the impulsive getaway. While Green has called McAllen home for the past year, his heart is set on more travel.

Unfortunately, a history of cardiac issues was slowing him down. Feeling weak and recognizing the need to make some major lifestyle changes after a second heart procedure, Green entered the South Texas Health System Heart Intensive Cardiac Rehabilitation Program.

A History of Heart Issues

Green’s cardiac issues started more than two decades ago and resulted in a triple bypass. Unfortunately, he admits to carrying on with his usual habits after that first procedure.

Unfortunately, Green was forced to think about his heart again when he experienced intense pain years later – pain he describes as feeling like an elephant sitting on his chest. He hoped it would go away on its own, but it was discovered that Green had suffered several heart attacks over the years. Next up was an angioplasty and stenting at a Houston hospital.

A Commitment to Better Health

"I had no clue what the Intensive Cardiac Rehab Program was about,” Green says. “My whole life I’d heard about diet and exercise — that’s what you're supposed to do. I assumed it was about that. I was just going to walk in there and see what they could do for me.”

The Intensive Cardiac Rehab Program is designed for people with severe heart disease, or those who have recently undergone a heart-related procedure. In collaboration with Pritikin Intensive Cardiac Rehab, the program uses a holistic approach that involves supervised exercise, nutritional counseling, stress management and emotional support.

Though Green entered without any expectations, he soon came to enjoy his three-times-a-week sessions. “The staff was really nice and I could tell they genuinely cared about the people they were looking after — it wasn’t just a job, they had a passion for it,” he says. “Over time, I started to feel a little better and a little stronger, but it wasn’t until I got my blood results back that I was really impressed.”

According to Green, his A1C level was at 6.1% — in the prediabetic range. A few weeks into the program, it went down to 5%, an important milestone since anything below 5.7% is considered normal. “That was when I said to myself, ‘Wow, this program really works. The proof is in the pudding,’” Green says. “That gave me even more incentive to keep up it up.”

Green admits he doesn’t always adhere to the program perfectly, straying from the low-fat Pritikin diet occasionally for an evening out with friends, but he says the results are well worth the discipline it requires.

In addition to lowering his blood sugar and cholesterol, Green has improved his endurance. “I haven’t been able to walk more than a block without having to stop for probably six years,” he says. “And now, I can walk on a treadmill for half an hour.” Since getting his levels in a healthy range, Green’s next goal is to reduce his medication.

For others getting ready to enter the program, the veteran emphasizes that patience and consistency are key. “You didn’t get unhealthy in a day and you’re not going to get healthy in a day,” Green says. “It took you a lifetime to get to where you are now. If you do 90% better than you used to, you will start to see results.”

While he’s going to miss the nutrition, counseling and exercise sessions – and all the friends he’s made along the way – once he completes the program, Green says what he has learned will stay with him forever. “The program has changed my life and how I look at things, absolutely,” Green says. “I’m healthier now, I can walk farther now and when the cardiologist finally tells me I’m good to go for more adventures, I’m off.”