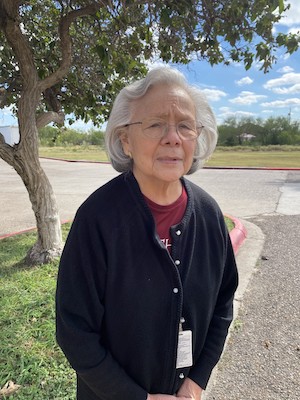 When Nora Cruz started her career at South Texas Health System McAllen (then known as McAllen General Hospital), she never anticipated what a long, fulfilling career she would have. Cruz began working in the Dietary Department, where she spent 30 years as a dietary supervisor before transferring to the system’s Supply Chain Operations Department to serve as the administrative secretary.

In November 2021, after a total of 52 years with South Texas Health System, the 79-year-old Cruz officially retired.

“People would ask me, ‘Why don’t you retire? When are you going to retire?’ and I told them, ‘I don’t feel like I need to retire right now. I love my job. I like what I’m doing,’ ’’ she says. “I was always ready to come to work every morning. For me, I just liked working with hospitals.”

Whether tracking inventory, answering calls or organizing files, Cruz always maintained a positive attitude while doing her job. According to Cruz, her biggest struggle was adapting to digital systems. But she was never deterred.

“I’m organized, with one exception — I’m not and probably never will be very oriented on the technology,” she says. “That’s the only thing. But I will not sit back and not ask for help because I will find a way to get my work done.”

In addition to enjoying the duties of her role, she says her work “family” has also made her time with South Texas Health System so incredibly special. “I think in times of trouble, we all pull together and move past it,” she says. “All these people who work around this building are always friendly and saying, ‘Good morning, how are you?’ I would say we’re all together in times of crisis.”

One such time was in the early days of COVID-19. Cruz and all South Texas Health System employees took on more responsibilities to help ensure a safe work environment.

“For two weeks straight, I was sitting out in the lobby making sure when people came in, they sanitized their hands and had their temperatures checked,” says Cruz. “I never had any hesitation. And through this, I got to know everyone in the building a little better and they got to know me and who I really am.”

While she says she’ll miss her job and everyone she’s met over the years, Cruz looks forward to spending more time with family. “I feel proud of myself for everything I’ve gotten do to here,” she says. “But it’s time for me to retire and take better care of myself. I’m thankful for my coworkers for always looking out for me and for God for letting me work all these years and be safe.”