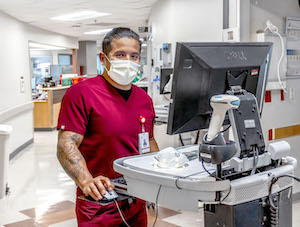 As a child, Miguel Grajeda recalls flipping through his older brother’s health magazines studying fitness tips. This helped him learn how to take better care of himself and sparked his passion for wellness, leading him to the career he enjoys today – as a nurse who takes pride in helping care for others.

Learning the Ropes as a Volunteer

“It really helped me kind of see the dynamics of working in a hospital,” he says. “It was eye-opening.”

Whether running samples to the lab or helping with the discharging of patients, Grajeda says he enjoyed every minute of his volunteer experience, especially getting to build relationships with other volunteers and hospital staff members — many of whom he is now working alongside.

“It’s like an evolution,” Grajeda says. “When you’re a volunteer, you feel like you don’t know much of anything, so you think, ‘Oh man, how am I going to survive here?’ The nurses and doctors are so good. It’s a little intimidating.”

This feeling only pushed him to work harder in school and learn as much as he could from the hospital surroundings.

“Back then everything seemed so complicated and almost scary,” he says. “Now I look back on that time and can see that I’ve come a long way."

A Confident Return to the Place It All Began

“After nine years of working as a nurse I finally came back and feel like I’m able to live up to the standards of the hospital. Now I’m doing these things alongside the doctors that I used to see as a kid.”

Grajeda says he looks forward to his shifts every day because of the positive environment and his ability to make a difference.

He credits his nursing career to his start as a volunteer and encourages any student interested in healthcare to consider taking that first step by becoming a volunteer.