“I Want to Give Back What Was Given to Me”

Everything Changed in an Instant for Nursing Student “Quique” Rodriguez 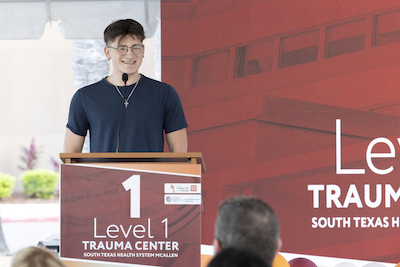 In September 2021, Quique Rodriguez was a 20-something college student pursuing a degree in nursing who had his whole life ahead of him. That all nearly changed in the blink of an eye when a vehicle involved in a police chase struck his car. That night, and the accident that nearly claimed his life, are a complete blur for Rodriguez. “It’s still troubling for me to understand how serious it was,” he says. “I remember hanging out with my friend. And then I went home. And that’s all I remember.”

The details of that night, however, are something Quique’s mother, Citlali Rodriguez, will never forget. She describes getting the phone call that every parent fears and hearing the details of her son’s grave accident. “First thing was the worry of a mother to know if my child was alive,” Citlali says.

After the accident, the young Rodriguez was rushed to South Texas Health System McAllen – now verified as a Level I Trauma Center – where the trauma team worked tirelessly to save his life. That included performing brain- and lung-related surgeries over the course of 48 hours, as well as putting him in an induced coma for four days to let his body rest while helping to lessen the risk of damaging effects to his brain.

A Commitment to Recovery

Quique would end up spending two weeks in the intensive care unit and an additional four days in the hospital’s step-down unit before being transferred to STHS McAllen’s inpatient rehabilitation floor for treatment, where he had to relearn basic skills like walking, eating and talking.

“There were things I could do before that I couldn’t do anymore,” he says. “My family motivated me to keep pushing forward.”

Today, Quique has made a nearly full recovery and is back to his old self. He’s not taking his second chance at life for granted. Along with returning to the gym to regain his strength, he’s back to pursuing his nursing degree.

“I never realized how life could be taken from you at any moment,” he says. “It’s definitely motivated me more to be a nurse. I want to be able to take care of people the same way I was taken care of.”

As for Quique’s mother, she couldn’t be more thankful for the care he received at STHS McAllen. “I really don’t think he could have ended up in a better place,” she says. “Everyone who helped take care of him has a piece of my heart. I carry them with me every single day.”