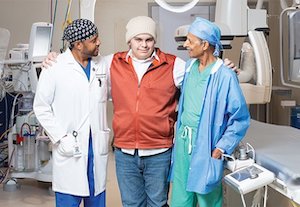 It was a day like any other for then-14-year-old Aristeo Cantu. He was just back from getting a haircut when he suffered a massive stroke while taking a shower.

“The term I used was like being hit by a speeding train,” says Cantu, now 18, when he describes that fateful day. A second episode was marked by dizziness. “That one was worse because I started to lose all my balance,” he says. “Everything started getting very cold, a cold like I had never experienced before.”

Luckily, Cantu’s mother and sister were home. His mother urged him to stay awake, while his sister called 911.

“I remember telling him, ‘Stay awake, keep your eyes open. Look at me all the time,’ ” Cantu’s mother Ruth recalls. “I didn’t know what [was wrong], but I knew something was not right because I started seeing Aristeo’s life going away.”

The ambulance rushed Cantu to South Texas Health System Children’s where a CT scan revealed a life-threatening condition – a ruptured artery at the base of his brain. Cantu, who needed immediate surgery, was then transported to South Texas Health System McAllen’s neurointerventional suite. There, doctors discovered Cantu had an extremely rare, orange-sized malformation near his brain. Over the next 27 days, Cantu underwent 11 surgeries to clear the mass and repair the damage it had caused.

After being successfully treated, the teen spent the next 34 days at the inpatient rehabilitation center at South Texas Health System Edinburg, where he received a minimum of three hours of intensive physical, occupational and speech therapy each day to help him regain his strength and function.

Ruth Cantu is especially grateful that her son was able to receive all his treatments within one hospital system. “All the doctors and nurses have done an amazing job. Because this treatment was available here, we did not have to travel out of the area,” she says.

Today, Cantu is a happy and healthy 18-year-old, a skilled musician who enjoys playing the drums for his church, Solo Por Gracia Ministries Church.