If you are having a medical emergency, call 9-1-1. For accurate wait time, call the hospital. 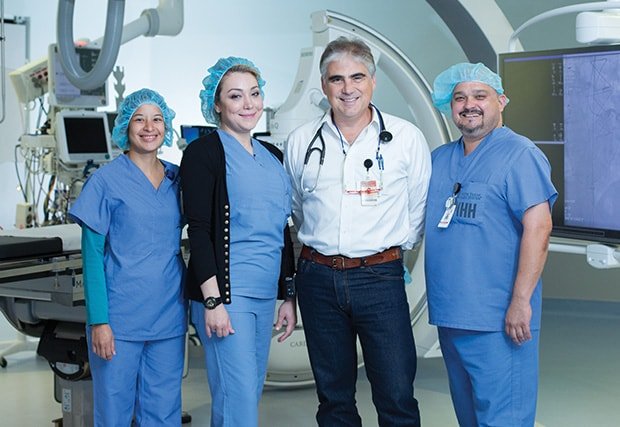 Rafael Chacon was at work when he had a heavy feeling in his chest. He thought it was heartburn, but decided to leave work early anyway. He woke the next morning with an uncomfortable feeling in his chest, but went back to work. He called his wife to make an appointment to see the family doctor. But the pain got worse and he couldn't wait.

At the local hospital, doctors decided he needed a higher level of care and transferred him to McAllen Heart Hospital, where a cardiac team was ready at the door waiting for him to arrive. Rafael recalls the flurry of activity and within 17 minutes, he was in the cardiac catheterization lab, where Cardiologist Luis Padula, MD, inserted a catheter into the artery of his heart and inflated the tiny balloon to restore blood flow.

“I remember Dr. Padula asking if I could handle pain,” Rafael says. “I told him yes, the only pain I can’t take is the one in my chest. Then he told me, ‘You’ll be fine, here we go!’”

Rafael spent three days in the hospital, and his wife, Bertha, never left his side. He and his family are grateful for the team at McAllen Heart Hospital. They were amazed at how quickly everyone mobilized and expressed genuine concern for Rafael. “I understand that’s their job, but they just made us feel like we were special,” says Bertha.

Ten days after his heart attack, Rafael celebrated his 49th birthday. He is healthier and back at work, following a conservative treatment of medication and diet management. His daughter, Jocelyn, is so glad her father is back home. “He is my everything!” she says.

Schedule an Appointment and Get More Information

Learn more about The Heart Clinic